Review of the XFactor F1 kit, available at Vape Factor.

As for the atty/carto/cato… I must say I was pleased by it.
I’ve tried almost every carto of this type, from the original – the Apoloe – to the white brand – like Riva-T. In the end, I’ve always went along with the Apoloe, mainly because of it’s vapor, flavor and temperature. 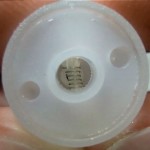 For me, it is all about the coil. While the Apoloe has a thinner but greater length coil, others have a more regular one. This would provide the Apoloe with a greater and better heating area, thus more vapor and warm.
In the XFactor F1,that was fixed. It also has this kind of coil, making it much better. For me, the negative point is when filling it. If you’re not careful enough you can have some eLiquid leaking out (and also the PG or VG eLiquid issues – too thick or thin – requiring you to adjust the inner rubber seal).

As for the batteries, they have a capacity of 900mAh what will give you from 8h to one and half day of vaping, depending on how you use it. A funny feature is – in this case are, the battery charge indicators. At the bottom you have 5 LED’s that will indicate the remaining charge of the battery as also the activation button (changes its color). And like the eGo’s, the 5-click on/off and pwn regulation but to 3.6V :).

Something I’ve not mentioned in the video, is that the material and construction are pretty solid. Unlike the Apoloe, the XFactor F1 ceramic cup is pretty stuck to the central tube/pole.

Accounting all this, and the current price, it’s a great kit that really surprised me!